The Equality Act 2010 (Specific Duties and Public Authorities) Regulations 2017 stipulate that all businesses, public sector and third sector organisations with over 250 employees must publicly report on average pay differences between their male and female employees.

The Regulations require employers to publish their:

As a public sector body, we are required to publish this pay gap information within 12 months, taking the “snapshot date” of 31 March 2021.

Our calculations follow the legislative requirements as set out in the Equality Act 2010 (Specific Duties & Public Authorities) Regulations 2017. All staff who were deemed to be relevant employees at 31 March 2021 are included.

The purpose of gender pay gap reporting is to achieve greater gender equality in terms of pay across the UK and increase pay transparency. This differs from equal pay which deals with differences between men and women who carry out the same roles.

Details within this report

Using a snapshot of employees’ pay as at 31 March 2021, only 3 of the 6 calculations detailed above were made due to no bonus payments being paid at CDC. The 3 calculations are as follows:

Relevant employee - An employee who was on full pay at the point of the data snapshot as at 31 March 2021.

Median gender pay gap - The median is defined as the salary that lies at the midpoint and is calculated by ordering all salaries from highest to lowest and the median is the central figure.

Quartile pay bands - The quartile information is calculated by listing all salaries from highest to lowest and then splitting that information into four equal quarters to determine the percentage of male/female employees in each quartile.

*A relevant employee is an employee that received full pay, not reduced to parental leave pay or sick pay, for example, as at the snapshot of data on 31 March 2021. 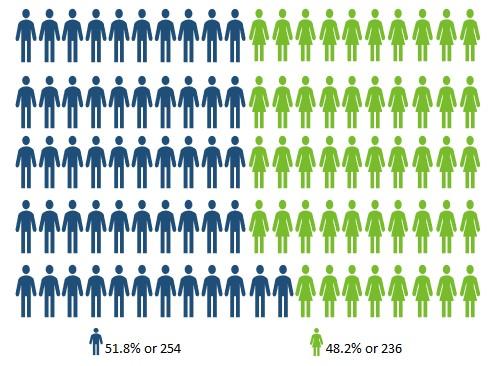 The mean difference recorded at CDC has slightly reduced from 0.83% in March 2020 (0.14p per hour) and is considerably less than the national public sector mean pay gap which is 14.5% (Office for National Statistics – ASHE).

As at 31 March 2021 the mean hourly rate for men was £17.45 per hour and for women it was £17.48 per hour.  This means that women earned an average of 3 pence per hour more than men, which equates to a mean difference of 0.17%. This is the first time in the last 3 years that the average hourly rate of women has been higher than men.  The figures for 2019, 2020 and 2021 are as follows, showing a slightly steeper increase for females of 87p per hour over three years than the increase for males of 51p per hour. 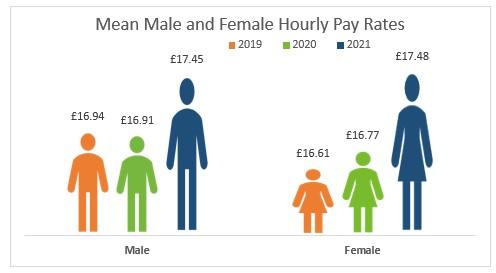 As at 31 March 2021 the median hourly rate of pay for men was £16.20 per hour and for women it was £16.20 per hour. This means that men and women earned the same per hour. This is considerably less than the national public sector median pay gap which is 15.8% (Office for National Statistics – ASHE). The figures for 2019, 2020 and 2021 are as follows, showing a slightly steeper increase for females of 91p per hour over three years than the increase for males of 82p per hour. 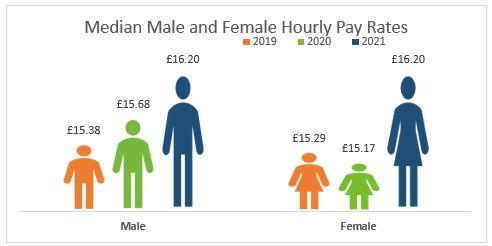 CDC does not operate any performance related pay or bonus schemes and therefore has no bonus gender pay gap.

The gender split per quartile as at 31 March 2021 is detailed below and serves as a useful benchmark to determine progression through the pay scales.

The hourly rates that represent each quartile are as follows:

The proportion of males to females in the lower quartile - 47.97% male to 52.03% female at the lower quartile is only slightly different to that of total workforce profile of 51.8% males to 48.2% females.   This trend continues with each subsequent quartile. There is a slight imbalance with the proportion of males earning a higher rate of pay at the lower middle quartile but this switches to females earning a higher rate of pay at the uppermiddle quartile, and then switches once more with males earning higher salaries in the upper quartile. Whilst there is a difference at each quartile the margins remain very small.

In the upper quartile, 5 (41.66%) of the 12 Senior Management team (Assistant Director level and above), are women, which is less than the 48.2% gender split of the workforce.

We are committed to the principles of equality, diversity, fairness and inclusion and our approach to people management should not put any group at a disadvantage.

Regardless of identity or background, everyone deserves to be able to develop their skills and talents to meet their full potential, work in a safe, supportive and inclusive environment, be fairly rewarded and recognised for the work they do and have the opportunity to have their say on matters that affect them. We are also committed to achieving a diverse workforce that fully reflects our community.

We will continue to advance our inclusion initiatives, particularly where there are any barriers for women to progress into higher paid roles, or roles where they are under-represented.

Flexible and agile working and family friendly policies will assist Cherwell District Council to attract and retain staff in a competitive job market and in a geographical area with low unemployment.

The gender pay gap within CDC is relatively small, however while we understand that publishing the data will not in itself remove the gap, continuing to do so is the first step towards that aim and we are committed to learning from best practice as part of our journey.

The gender pay gap data will be analysed on an annual basis, a comparison of figures will be completed year on year and the Senior Management Team will continue to review and monitor this data.

We will ensure that job grades continue to be determined through objective analysis and job evaluation to maintain the integrity of the pay and grading system.