Cherwell District Council is pleased to announce that a new canal walkway bridge at Castle Quay is open. 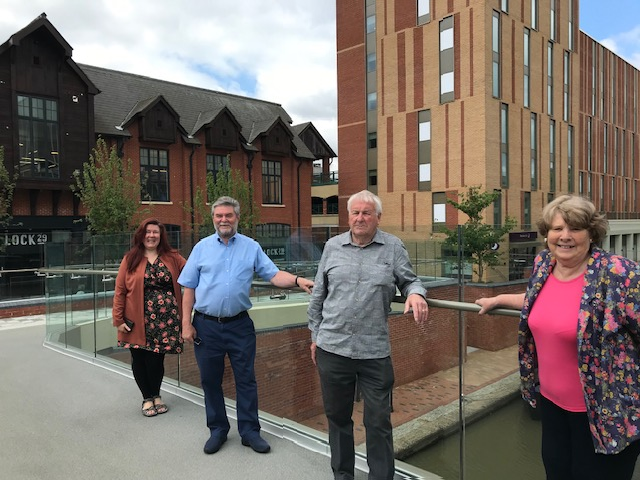 It connects Castle Quay Shopping with the new Castle Quay Waterfront dining and leisure destination and was declared open to the public today by Councillor Lynn Pratt, Cherwell District Council’s Lead Member for Economy, Regeneration and Property, and Councillor Cassi Perry, Member for Banbury Cross and Neithrop and a member of the Castle Quay Advisory Group.

The bridge is located close to Lock29’s new alfresco dining space and is the latest milestone to be achieved in the regeneration of this canal side destination in Banbury. The bridge will connect the existing shopping centre with the new Castle Quay Waterfront development and Spiceball Leisure Centre.

Councillor Lynn Pratt, Cherwell District Council’s Lead Member for Economy, Regeneration and Property, said: “I am really proud of what has been achieved during a very difficult period. To reach this very important milestone is an incredible feat. The canal bridge looks very impressive, and I hope the people of Banbury will be as excited as we are as they start to see stages of the development come to fruition. I also want to thank the public for bearing with us during periods of disruption - I promise it will all be worth it. Castle Quay Waterfront is going to be incredible when it’s finished, completely transforming Banbury’s leisure and dining offer for everyone.”

Councillor Cassi Perry, Member for Banbury Cross and Neithrop and a member of the Castle Quay Advisory Group, said: “The canal is so important to the people of Banbury – it’s part of the town’s heritage and there was a lot of pressure to deliver a bridge that was modern but considerate to its surroundings. I live on a narrowboat on the Banbury canal, and I am confident that this has been achieved. The finish of the bridge looks really smart, especially with the use of the glass sides and it is so exciting to see the bridge being used again by the public, as it is such a prominent access route in Banbury.”

Banbury’s canal is key to the life and identity of the town, so it was essential the bridge design was sensitive to its heritage. Castle Quay worked in collaboration with the Canal River Trust, as well as Leslie Jones Architects, who are experts in urban renewal and regeneration and designed the bridge. The architects worked to ensure visitors would have a clear view of both sides of the canal, which is why a modern glass balustrade has been incorporated. Additional steps have been added if you are approaching from Tooleys Boat Yard, to make use and access as seamless as possible.

The bridge was manufactured in the UK and delivered to site as a complete piece, which was then craned into position.

The first phase of the redevelopment launched in August, including a brand-new 30,000 square foot Lidl and 117 room Premier Inn. Both are performing exceptionally well, with footfall high throughout the week at Lidl and visitor numbers consistently strong at Premier Inn.

The Light will be opening a high-quality entertainment experience in Easter 2022 including a state-of-the-art 8 screen cinema, a leisure offering with 10 lanes of bowling and a sun terrace overlooking the canal. The Waterfront will also include several restaurants, which are set to open at the beginning of next year, all of which will create an amazing new leisure destination in Banbury.